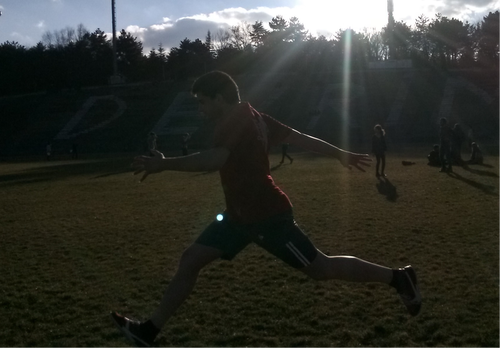 Running is one of my long-standing hobbies. It has two sides which I am deeply interested:


1-] Increasing the physical well-being of the body through physical activity, increase in the blood circulation and overall health.

2-] Necessity to do the entire activity (such as non-stop 6 k running) with extreme discipline, control over the body and again extremely strategic utilization of the overall energy one has, while enduring some ephemeral pains, which can be quite high in some instances.

With time, I will share my experiences, what I see from myself and others and overall cool stuff regarding running in this page (such as; the longest non-stop run I did was 15k, which I stopped out of boredom, 10 k is something like a borderline from a chubby person to a runner, at least for me. )


In the morning, first in my life I tried to run 20 k in a rugged terrain, (in which the maximum I did was around 15 in flat terrain). I took one small chocolate cake and started to run, up to 15 km it was good but I was severely dehydrated later on, I grabbed another person's water cabin and more or less saved my life there

I was not running for a long time so the activity itself was challenging, though still I can say I ran non-stop more than 12 k or so. I will put more in-depth information about the body feelings and strategies of running off-road when there is time.
Üniversiteler Mah. Dumlupınar Blv. ODTÜ İnşaat Mühendisliği K4 - 119 / Çankaya, ANKARA
e171894@metu.edu.tr