The sections below shows summary of some of my research works that got published in somewhere in someway. 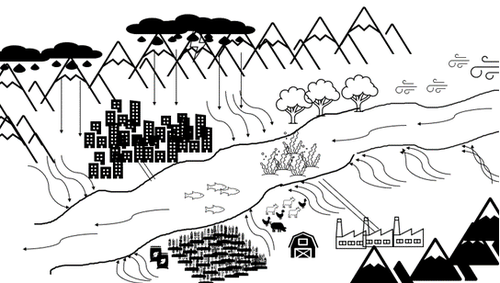 Identification of the current and expected future pollution sources to rivers is crucial for sound environmental management. For this purpose numerous approaches were proposed that can be clustered under physical based models, stable isotope analysis and mixing methods, mass balance methods, time series analysis, land cover analysis, and spatial statistics. Another extremely common method is Principal Component Analysis, as well as its modifications, such as Absolute Principal Component Score. they have been applied to the source identification problems for nitrogen entry to rivers. This manuscript is checking whether PCA can really be a powerful method to uncover nitrogen pollution sources considering its theoretical background and assumptions. Moreover, slightly similar techniques, Independent Component Analysis and Factor Analysis will also be considered (Hatipoğlu, 2022).

Hypothetical Modeling of the Pump & Fertilize in Turkey 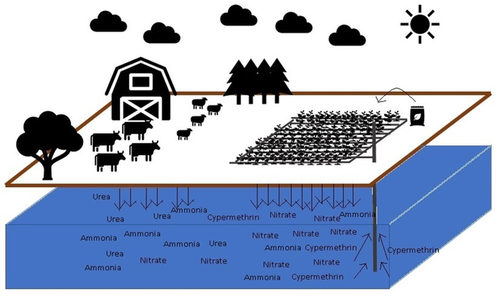 Pump and fertilize, while removing the nitrate in the groundwater, can also reduce nitrate and pesticide requirement (King, et al., 2012). Even though the valorization of the groundwater contamination sounds simple, there are only a couple of case studies with 1-year field experiments (Francis & Schepers, 1994), (Liang et al., 2016), (Libutti & Monteleone, 2017). This makes the feasibility assessment for the process impossible. Thus, prior to the very laborious and costly experimental studies for the evaluation of pump & fertilize process, a general modeling study to find out under what conditions of climate and in which soils this process is promising, is required.

I have constructed unsaturated zone groundwater models via HYDRUS 1D for prevalent soil types in Turkey, with relevant climates for maize production. Maize was chosen as it is globally the most produced crop and at the same time removes more than 240 kg nitrogen in 1 ha in 1 year through 10000 kg/ha grain generating hybrid (Doerge, et al., 1991). Beside 5 major soil types in Turkey, general soil textures (excluding silt and silty clay) were also modeled to evaluate the effect of the changes in parameters more clearly. Soil parameters were generated from texture variables by Rosetta Lite v1.1, and climate parameters were generated from freely available data on the internet through Criwar 3.0 using the Penman-Monteith method.

As a result, among the climates used, which are Eskişehir [Csb], Adana [Csa], Şanlıurfa [Bsh-Bsk], Düzce [Cfb], Rize[Cfa], (Köppen-Geiger classification in square brackets), the dryest climate (Şanlıurfa) performed better as plants were passively able to uptake nitrate more since more irrigation water required for plants, indicating more nitrate removal. Nitrate leaching both depends on the hydraulic conductivity of the soils, and also the ability of plants nitrate uptake, and very low and very high permeable soils were unsuitable for this purpose. Loamy soils were in general much better than the rest, and Cambisol among prevalent soil types in Turkey was the best choice to realize pump & fertilize.

The related publication is my M. Sc. thesis study, titled "Modeling the Effects of Irrigation by Contaminated Groundwater" (Hatipoğlu, 2018). I have also done an oral presentation related to this study (Hatipoglu & Kurt, 2018), and with some additional no-denitrification models and better explanation of the equations behind the models (peer review helps a lot, after all :] ) we also have an article, which is about to be opened to access for everyone in a few months (Hatipoğlu & Kurt, 2019).


In an analytical chemistry laboratory in the Chemistry Department, I first synthesized silver nanoparticles through a tetrahydroborate pathway according to the standard procedure. The actual research was synthesizing nanoparticles from Artemisia absinthium extracts. We first mimicked the study of Ali et al. (2016), and then tried various ways to extract: leaving overnight, boiling water extraction, cold extraction, overnight shaking. Through zeta potential measurements and UV-Visible spectrophotometry spectrums, we found out the particles size distributions of nanoparticles. The particle sizes were in range of 30 nm to 90 nm, mostly around 50 nm. Of course, the small variations in the size of the particles in nanoscale make much difference. Yet this was a very good initial step in green synthesis of silver nanoparticles, especially if the target is not directly having 10 nm sized particles, but an average of 50 nm. We were unable to take SEM or TEM as the project was done without any funding.


This is, not directly a research subject, but I have conducted a significant amount of chemical analyses, placed and collected passive samplers and at the same time worked with a private company on regular air pollution measurements in various cities in Turkey. The instruments I myself used were UV-Visible Spectrophotometry and Gas Chromatography-Flame Ionization Detector (GC-FID) with Thermal Desorber, in conjunction with EPA's standard methods. I have also trained several students in conducting analyses with both of these instruments.

Hatipoğlu, Y. G., Kurt, Z. (2018, October). Application of Finite Element Method by HYDRUS 1D for assessing the effects of Irrigation by Contaminated Groundwater in Turkey, oral presentation given at the Beyond: Workshop on Computational Science and Engineering. Ankara, Turkey.